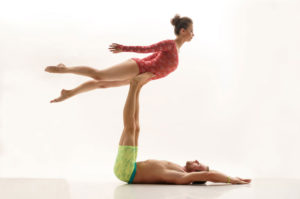 Bible Gymnastics is the process of piece-mealing single scripture verses, as opposed to reading them in the context of surrounding text.  Many of today’s teachers perform Bible Gymnastics to get around the plain truth about relationships in the Bible. It would take an army of Bible acrobats a week to explain the connection between what most churches teach about the family, and what the Bible actually says.

In every “Bible Teaching” church, the official position is that the Bible is the Word of God, and that it is inerrant. The reality is that right after that statement is made, the scissors come out, and the parts of the bible one group or another do not like, get dropped on the “cutting room” floor.

And said, For this cause shall a man leave father and mother, and shall cleave to his wife: and they twain shall be one flesh? Wherefore they are no more twain, but one flesh. What therefore God hath joined together, let not man put asunder. – Matthew 19:5-6

There are several things that we can glean from this ideal model of marriage and family as depicted by the Book of Matthew:

Now, lets compare that to a popular teachings on relationships and families, to see how the two compare:

The problem with this model is that it supposes to be a turn to the north, when it is in fact a TURN TO THE SOUTH. It sets the bar VERY HIGH for the man in particular to prove himself to be a suitable mate for the woman. Takes love completely out of the equation. And, in fact, is primarily focused on financial considerations. Unfortunately, that is not God’s model.

Over time, this model has proved to be the destruction of the black family. But things get worse from here.

But I suffer not a woman to teach, nor to usurp authority over the man, but to be in silence. For Adam was first formed, then Eve. And Adam was not deceived, but the woman being deceived was in the transgression. Notwithstanding she shall be saved in childbearing, if they continue in faith and charity and holiness with sobriety. 1 Timothy 2:12-15

Very few Black Churches today would adhere to the sentiments of Ephesians 5, though some verbally agree that a woman should try to submit to a Godly husband. But almost no modern church would agree with the sentiments of 1 Timothy 2:12-15. Rather, church leaders both insist on the inerrancy of the whole bible, while quietly insisting that Paul was a bigot, and so that (little part) of the bible should be ignored.

The effect of this is that many Black Churches have filled the ranks of their “Ministry” leadership with women, given them authority over virtually all of the men under them, which leaves the men cowered by the wives in the church as well as in their own homes. Their sons, now seeing their cowering fathers, look forward to the day when they can escape the church altogether, and pursue lives where they can be free from the oppression of women in authority.

And, if it was ONLY that bad.

In recent years, several nationally known Black Pastors have taken to creating an extra-biblical mythology of the black man that helped them rise in prominence, and filled their bank accounts through book, CD, and DVD sales. The problem is, none of it is properly scriptural.

A complete description of this mythology is beyond the scope of this book, but a general outline of it follows: