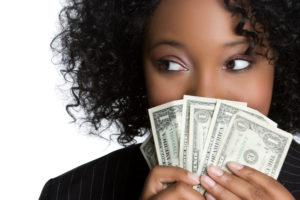 Church teachings emphasize finances and career as the foundation for the family. This is nowhere in the Bible.

For this ye know, that no whoremonger, nor unclean person, nor covetous man, who is an idolater, hath any inheritance in the kingdom of Christ and of God. Ephesians 5:5.

It is hard to find a black church today that does not counsel young black women to marry men with a good job, education, and income. That is because covetousness is America’s pet sin, and the church reflects those same secular attitudes. Covetousness is the engine that drives our economy, the marketplace, and the all American lifestyle. That is why it is not condemned as a sin in the church.

Covetousness leads to idolatry, and takes our mind and heart off the things of God. Secondly, it leads to discontentment. If we are ALWAYS looking at what we don’t have (but want), rather than what we have, we will NEVER be content!

What does this have to do with relationships and family? Because we refuse to confront the demonic impulse of our young people to heap more and more “stuff” upon ourselves, we instead teach our young women to look for men who can give them more! Or share the burden of acquiring more stuff! As opposed to looking for young men who love God, and are willing to follow His teachings, and His Spirit!

The truth is, that black women are being taught to be discontent with what the average black man can bring to the table in today’s racist world. This seed of disrespect is being planted continually, so there should be no wonder that the black divorce rate is so high!

I was at a house buying Seminar once, where a black women stood up and announced that she had picked out a house, but her husband did not make enough money to buy it. So, she announced, she had decided to divorce her husband, and move in with another woman who made more money than he did!

Have ye not read, that he which made them at the beginning made them male and female, And said, For this cause shall a man leave father and mother, and shall cleave to his wife: and they twain shall be one flesh? Matthew 19:4.

A popular myth is the “whole alone” myth. That is, that God wants us to be “complete”, or “whole”, all by ourselves. If you are not content with yourself, you won’t make a good mate. Sounds good, right?

The problem is that it is the OPPOSITE of what the Bible actually teaches. It teaches that the two shall “become one flesh”. It almost seems like the point of the teaching is to contradict the Bible!

But as a result of this myth, many women are consciously deciding to go it alone. It feeds the “I don’t need no man” spirit. So these women are free to go into the working world by themselves. And if they are bright and ambitious, they can heap material goods upon themselves, and fulfill their “dreams” without the help of a man.

So God created man in his own image, in the image of God created he him; male and female created he them. And God blessed them, and God said unto them, Be fruitful, and multiply, and replenish the earth, and subdue it: and have dominion over the fish of the sea, and over the fowl of the air, and over every living thing that moveth upon the earth. Genesis 1:27-28.

God’s command for the man and woman to “become one flesh”, and to “be fruitful and multiply” are considered “advisories” at best in today’s churches. Our personal dreams are all that matter.

Other black women are having children out of wedlock, but are being counseled not to marry the father because he doesn’t have sufficient income. The most common defense is, “it will end in a disastrous marriage”. And it will. Because everyone is already saying it will. And because the church is not counseling both of them to forgive the other. That would probably make the relationship work, but would disprove some pet myths.

Many black men, having finally established themselves financially, seek later to reconcile with their children, and the mothers of those children. However, they find that road has been blocked, because they have been stigmatized as “lazy, foolish, and uncaring” by the children’s mother. This is especially likely if she has managed to establish herself financially, independent of the father.

Unfortunately, the church too often reinforces these negative attitudes by putting a permanent stamp of noble victimhood on the mother, making it impossible for the men to reenter their children’s lives.