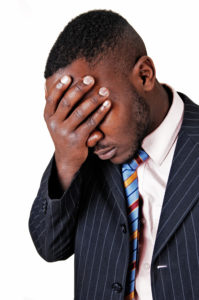 Years ago a popular preacher began teaching that black men were “broken”. It made the KKK proud.

Years ago, when I was coming up, stereotypes against black men were spread broadly by racist white organizations. Organizations like the Ku Klux Klan, the press, along with politicians, racist movies producers, etc.

Today, if you want to get up to speed on the most racist stereotypes about black men, simply visit your local church and pick up a CD or DVD of a recent sermon. Better yet, ask any bitter black woman who had an encounter with one of our sicker brothers. I have no doubt that the Klan is struggling to keep up with the church in their attitudes against black men. Its gotten so bad that the Klan has had to move on to trashing the Muslim and Hispanic communities. Trashing black men has too much competition from the church these days.

No worries. The church has programs to “fix” these broken black men, since so many of them end up in prison. Never mind that a black man can be sent to prison for five years for what a white male would get fined $50. We have to fix him, since there isn’t any racism anymore. Or so we are told.

Fix the educational systems that label our young men ADHD? No. Of course not. Fix the fact that young black males are sent to detention at much higher rates than white males for the same infractions? No. Of course not. We have to cling to the fiction that there is something INHERENTLY wrong with black men. Even though this approach has failed over the last twenty years. Even though the Asian community doesn’t taint their children with such negative stereotypes. Even though the Arab community teaches their males to be proud of their heritage and race. Even though African immigrants are leaving our children in the dust, because they don’t suffer from such negative stereotyping.

So why do we continue to demonize our own children? Follow the money of course! Someone is making a lot of money, not to mention building considerable reputations for themselves by betraying their own race! And I don’t need to tell you who!

But maybe you are one of those people who are convinced that black men are really as bad as so many black preachers and the Media has painted them. Maybe they irredeemable virile monsters that they are painted to be. Who would disagree when there is so much evidence against them?

Maybe “Charles Murray”, the purported racist professor who wrote “The Bell Curve”! He has written a new book, “Coming Apart”. In it, he details the decline of the white American community, the deterioration of the white family, and its declining “family values”.

So, if you don’t believe me, at least believe a purported racist. He sees the white male beginning to fall into the same traps that black men have been falling into for the last twenty years. Why? Because its the economy. The jobs (and the money) is going oversees. But our churches have taken to blaming the members of their own community, rather than taking on the larger forces that are draining our community of its energies and resources.

And what does the Bible say about all this?

The men of Nineve shall rise up in the judgment with this generation, and shall condemn it: for they repented at the preaching of Jonas; and, behold, a greater than Jonas is here. Luke 11:32.

So what did Jesus mean by this? He meant that if the church doesn’t get its act together, the very people that it condemned (black men) will rise on the judgement day and serve as witnesses against those Pastors and Bishops that condemned them! Why? Because many of them are seeing their sins and repenting, while the Pastors over them are continuing in their sin and refuse to repent!

Unlikely you say? Well, Bishop Long’s church was full of repentant black men. However, God chose to expose only one of their sins. That of the Bishop himself! That was because the men who served him were largely repentant, but the Bishop refused to confess his sins and repent!

If I was working on a car, and I kept fixing or replacing a part, but the problem persisted, maybe I am doing something wrong. Maybe, just maybe, I am working on the wrong part. The church is assuming that every problem with the black family is because the black man needs to be “fixed”. That approach has resulted in the problem continuing to get progressively worse!

Until black women are willing to accept their share of the problems with the black family, those problems will never be solved.