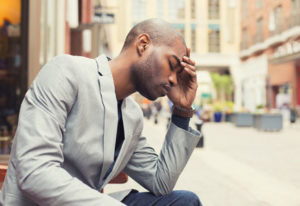 Facing a racist justice system, and disrespect in the church, older black men look to Islam for respect.

“Peace be upon you” has become a common greeting among black men today. Borrowed from Islam, the greeting has increasingly served to symbolize the bonding between black men. Fifty years ago, during the life of Rev. Martin Luther King Jr., men identified with the Christian church, and their bonds were formed there. However, men today feel rejected and disrespected by a church that often echoes the sentiments of the Ku Klux Klan. So they are looking for answers outside the doors of the church.

Where Are The Black Men in the Church?

Though most modern churches are still headed by black men, they are often flanked by a parade of women ministry leaders, deaconesses, ministry assistants, and other counselors. The Biblical Jesus, flanked with twelve strong men are nowhere to be seen. “Optics” matter. And the optics in most modern churches speak loudly that the church is not interested in what the black man has to offer.

A Growing Contempt for Black Men

During the days of the Civil Rights movement, the church was a refuge for black men seeking an escape from the harsh racism they faced in this country. However, two things happened to change that. The first was the crack epidemic of the 1980s that left large numbers of black men chemically addicted to a drug that was targeted at the black community for that purpose. The second was that the church turned against the black man, and began blaming him for the resulting damage to the black family, and black relationships.

To this day, the church insists on blaming the black man, stating that only they can “fix him”. The black man does not need to be “fixed”, he merely needs to learn who he is in Christ Jesus. The church, focused on making money more so than forging men, focused on the utilitarian view that they needed to fix black men so that they would be better husbands and fathers. That sounds like a noble goal. However, they continued to show their contempt for those men, seeing them simply as a resource that had to be straightened out, rather than a soul that has needs beyond being a husband and father.

A Self Fulfilling Prophecy

Study after study has shown that people will often live up to, or live down to what is expected of them. Black men often experience a flood of negative expectations for them. This often happens at school, at work, and home, and in the church. In my first semester of Graduate School, I struggled with a particular computer science course. My female Asian professor informed me that I (a black man) was not graduate student material, and coached me constantly to drop out of the program. I improved my grades in later classes, went on to take invitation only honors courses, and graduated with a 3.69 GPA. Thankfully, I was able to ignore her statement, designed to make me give up on what God had intended for me.

I remember my wife and I tutoring my nephew in English his Senior year of high school. His grades shot up the last two Semesters. However, his black female teacher gave him an F anyway! When we loudly complained, she explained that “he couldn’t have done it without our help.” Even though he had done all of the actual work. Her grade for him was based on her sense of his inferiority. Not the fact that he actually accomplished the work.

I was a member of a church many years ago. A number of black men were being groomed to be Ministers in the church. However, when the Pastor got sick, he turned the church over to one of two female Ministers who had fewer years at the church. She then turned around and all but barred these men from ministering from the pulpit. The men all had an independent meeting, and decided to angrily leave the church. Many of the male members in turn abandoned the church as well. Shortly thereafter, the church began a slow collapse, becoming a shadow of what it once was.

Betrayed By The Church

Secretly, millions of black men, especially young black men, feel betrayed by a church that should have their back. Black Pastors, black males themselves, continually rail against the sins of black men, while saying very little about their virtues. They remained largely unengaged while innocent black men were falling dead in the streets as a result of over zealous police that saw their role as protecting the black community from their male inhabitants.

Many black churches have an “innocent until proven guilty” policy toward their black women, and a “guilty until proven innocent” policy toward their black men. That is, if equally qualified candidates are up for a particular leadership position, the black man loses. Or, the black man is expected to go through rigorous ministerial training and filtering programs before gaining acceptance, while black women breeze through due to a double standard on competence and virtue.

Recently, I’ve had to sit through a series humiliating “sermons” that were simply railings against the perceived weaknesses of men. The most offensive being that women’s brains are inherently superior to men’s brains, because their hemispheres are more firmly tied together. Never mind that men and women’s brains are simply complementary, with women tending to have higher developed social, language, and multi-tasking skills, and men having more highly developed mathematical, spacial reasoning, and focus skills. In one case, the speaker provided an electronic diagram meaning to represent a man’s brain (with a single switch and dim LED), and a woman’s brain (with a complex set of lights, switches, and knobs).

Today, black men see a thriving and accepting Muslim community that respects men, has a strong sense of identity, and doesn’t blame black men for all of the problems with the black family. That is a very attractive combination.

The most attractive element that black men see in the Muslim community is that they celebrate manhood. Manhood has not become synonymous with crime, rape, gun violence, and academic failure. Their men have a strong respect for themselves, and their communities. They are among the highest earners in the U.S. And much of this success stems from their respect for the men of their communities.

Muslim men and women have stood strong even while extreme distortions of their faith threatened to tear the world apart. They maintained their dignity, and continued to prosper in a nation whose contempt for them has been growing, becoming more opening hostile, and more recently, becoming enshrined in Executive Orders. This takes a strong sense of self and purpose, and they have demonstrated that they have that in abundance.

Islam Is Not The Answer

Many black men, including myself, have formed an independent relationship with the Lord Jesus Christ. They are able to distinguish between the Jesus of the churches, and the Jesus of the Bible. The historically accurate Jesus. Thus, they cling to Jesus, even while they borrow ideas from Islam.

The answer lies in turning back the lies and distortions about Jesus Christ. To picture Him properly as the strong male figure that He was, and still is. To celebrate His manhood, and for us black men to embrace it. To conform to His true image and likeness. Which does not include blond hair, blue eyes, or little lambs.