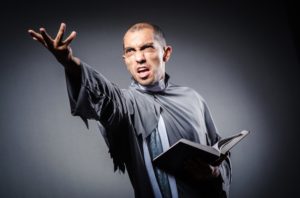 Jesus warned us that there would come Pastors who would preach the Gospel for profit, but have no real heart for the sheep.

Many reformers believe that Mega Pastors don’t teach the Word of God because they don’t really understand it well. They believe that if Gospel classes are offered to many of these Pastors and Bishops, they will reform on their own, and become better Shepherds. And perhaps some would. However, Jesus had another take on this. Jesus taught that being a Pastor was an affair of the heart, and that some Pastors are in it for the money. He called them “Hirelings”. He said that if anyone is not willing to put their own health and safety on the line, they are not fit to lead the Sheep. Further, He made it clear that there would be some men that would become Pastors strictly to for the pay. And that these men were not fit for Pastoral duties.

Obviously, no sitting Pastor, hireling or not, is likely to teach this message from the pulpit. That is because, despite its grounding in scripture, it causes congregants to look at the pulpit in a new way. In a way that might expose the motives and the devotion of the Pastor. And it is a rate person that will invite their congregations to examine them in this light.

The Signs of Hireling Pastors/Bishops

Jesus gave us one direct indicator that a Pastor is a hireling. That when the wolf comes, he flees. That is, when adverse circumstances hit the church, the Pastor looks around to find another perch. So, one sign that your Pastor might be a hireling is that they have moved around from one church to another during their career. Always going for increased revenue, increased exposure, greater celebrity, or a greater “market” for their books. A number of our current set of “celebrity Pastors” have moved around from one congregation or one city to another. That is indicative that they are Hirelings, and have no real heart for the Sheep.

Commercializing The Word of God for Profit

For we are not like so many others, who peddle the word of God for profit. On the contrary, in Christ we speak before God with sincerity, as men sent from God. 1 Corinthians 2:17 (Berean Study Bible)

In today’s world, many of our Pastors and Bishops are running large non-profit organizations, with “LLC” at the end, and “CEO” as part of their titles. Seeming to telegraph that they are in it for the money. After all, what purpose is a business, non-profit or not, except to bring in money? The fact is that many Mega Church Pastors have more in common with millionaire CEOs, and CFOs, then they do with the people of their congregations. Their mansions are in the same neighborhoods. They sit on the same corporate boards. Their aircraft are parked in adjacent hangars at the airport. What does this say regarding their status as hirelings?

Further, one can ask why at virtually every Men’s Conference, and every Women’s Conference of any size today has at least speaker from a large corporation? One “example of success” that we are encouraged to follow? Is it because these people are the people having lunch or dinner with the Pastor? Are these people the Christlike examples we should follow in our endeavor to take on Christ’s image and likeness?

In fairness, most churches today are non-profits, and this is no indication that the Pastor is “in it for the money”. The corrupt structure of our current legal system in this country, makes it difficult for established brick and mortar churches to work outside of this model. So, to determine whether a Pastor is a true Shepherd or not, other criteria needs to be used.

Though I speak with the tongues of men and of angels, and have not charity, I am become as sounding brass, or a tinkling cymbal. 1 Corinthians 13:1.

In the final analysis, the answer is fairly direct. Does the Pastor love the members of his congregation? Has he stayed with them through the storms that inevitably come? Does he exploit the members of his congregation, or does he nurture them, and feed them? Does he teach them the full, true, and unadulterated Word of God? Is he largely scandal free, that is, has he been free from adultery or financial impropriety? Does he live a lifestyle in accordance with his congregation, or is his lifestyle orders of magnitude above that of his average member’s?

These questions should not be confused with the question of whether his congregation is large or not. Many Pastors of Mega Churches have gone many years without scandal, only to be found out after decades of hidden scandal, and disgraced. But, this has also happened to Pastors of small and medium sized congregations.