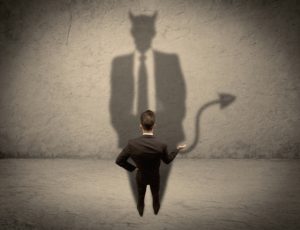 Today more than ever, we are seeing behavior in the public square that in any other age would be considered “monsterous”, and yet it is being accepted more and more as normal behavior. Even in the “Christian” community, behavior that would rarely be seen in the world, has now not only moved into the church, but is increasingly being accepted as “normal”.

This know also, that in the last days perilous times shall come. For men shall be lovers of their own selves, covetous, boasters, proud, blasphemers, disobedient to parents, unthankful, unholy, Without natural affection, trucebreakers, false accusers, incontinent, fierce, despisers of those that are good, Traitors, heady, highminded, lovers of pleasures more than lovers of God; Having a form of godliness, but denying the power thereof: from such turn away. For of this sort are they which creep into houses, and lead captive silly women laden with sins, led away with divers lusts, Ever learning, and never able to come to the knowledge of the truth. 2 Tim 3:1-7

It is often forgotten that we in the African American Christian community live within a larger community, and that the values of that larger community “bleeds into” our value system. The prevalence of modern media, spread through the Internet, and other mediums has allowed “American Values” to penetrate deeply within our community, and displace our own community’s values like never before. We have to be on guard all the time, that those values don’t “squeeze us into its mold”.

In the secular realm, the numbers of “monsters” are mounting. From Weinstein to Lauer using their seats of power to force women into sexual encounters just so that they can keep bread on the table. To Bill Cosby “drugging women”, and then satisfying himself while they lie helpless and prone.   To Brock Turners rape of an unconscious woman lying on the path, and then using his family’s money and influence to seek the lowest possible penalty for his crimes. Not to mention the fact that we have a “groper in Chief” in the White House, that continually excuses such behavior, whether by himself, or by others.

And in the church, we have a Catholic Church in crisis because they empowered their Priests to feast off the flock sexually, as opposed to feeding them. We have Eddie Long feasting off some young men in his congregation to satisfy his own sexual lusts. And we have so many Pastors caught in adulterous relationships that we have stopped counting. Our former Pastor John Cherry recounted to us how his denomination had set up a special system for transferring Pastors could in adultery from churches in one city to churches in a distant city to prey on unwary congregations.

The Rise of Lesbianism

While this point is debatable, at least some portion of the lesbian community is populated by women who have been used, abused, and thrown away by men. Women are certainly capable to developing unhealthy sexual appetites on their own, but the rise of lesbian has certainly been fueled in part by the selfish, domineering, and unloving attitudes of men.

The power of media has been used by the major media companies, in company with the Devil to present an image of men that is warped:

The “Restored” Man – A man fully committed to, driven by, and wholely surrendered to Christ, and desiring to walk in his Image and likeness.

Subconsciously most men have built themselves on a movie or television “archtype”, and may even have forgotten which one we are “based on”.

Note: The first four archetypes are not Biblical, since they are creations of worldly authors interested in maximizing profit in the entertainment industry.

Men of all types need to step out of their roles and conform to the image of Christ. Then be prepared to confront the “Macho Man” when necessary, to prevent the damage before it starts.