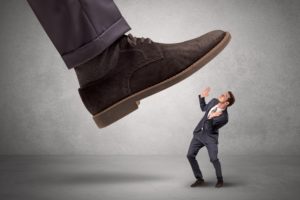 The idea that God wants us to obey the authorities in our lives unquestioningly, has even been in the news lately.  Most pastors teach authority or spiritual authority in such a way that it leaves the impression that one must obey, period.

They do this to stamp out any possible challenges to their authority, but they have created an environment where the most basic checks and balances are absent.  The result is a long history of major church scandals, some of which became public (e.g. Bishop Eddie Long, Earl Paulk), and some of which were only partially exposed.

The root of much of this teaching is in the idea that a church should be a business, rather than a church community.  Certainly, the Pastor or Bishop should take the lead, but that does not mean his ideas should never be respectfully questioned, or that suggestions should not be solicited from the larger community.

In the early church, the church existed to serve God and the larger community, and members in particular.  This was understood, and its actions (distribution of food to the widows and the poor) reflected that.  However, today’s churches are operated more and more like businesses, where tithes are offerings are collected on-line, significant paid staff may exist, and the church begins to operate in a manner that serves its own interests, rather than the interests of its members, or the larger community.  Worse tithing members are not considered to be shareholders (though they are “investors” in the business), so there is even less accountability than in commercial ventures.

This has already resulted in a culture where Pauline principles are violated on a daily basis. For example, it is common now for churches to encourage their widows and older people to tithe, even out of their meager retirement checks.  People on public assistance or disability are also encouraged to tithe.  Even though their “income” could hardly be considered an “increase”, so much as a sustenance.  It is increasingly common for ministries to encourage their older members to leave their estates to the church, even at the expense of surviving children and relatives.

In addition, Biblical admonitions regarding the treatment of workers are too often ignored, where long hours and low pay (if any) is often the norm.

Finally, as was seen in the case of the Eddie Long, Catholic church, and now corporate jet scandals, the sheep are eventually seen as food for the church leaders, there to satisfy the appetites of the those in authority.  Whether those appetites be sexual in nature, or simply hedonistic.

Recent writings on abuse of authority in political settings make use of “tribal” analogies to describe cultures where loyalty to a person or a small group of individuals trumps all adherence to establish standards.  Since so few churches today attempt to adhere to Pauline principles, it is fair to say that a high percentage of churches, and black churches in particular have moved into the “tribal culture” mode of operation.

The church as a whole often accepts contradictory interpretations of scripture when it comes to authority, in order to conform to current societal norms.  For example…

While the scripture does say…

Hebrews 13:17
Obey them that have the rule over you, and submit yourselves: for they watch for your souls, as they that must give account, that they may do it with joy, and not with grief: for that is unprofitable for you.

1 Timothy 2:12
But I suffer not a woman to teach, nor to usurp authority over the man, but to be in silence.

Most, if not virtually all churches today have women as ministry heads, even though having done so clearly violates some of Paul’s clear admonitions regarding authority.  This is not to say that women should be ministry heads under any conditions, it is merely to point out the inconsistent application of many of the church’s position regarding proper use and response to authority.